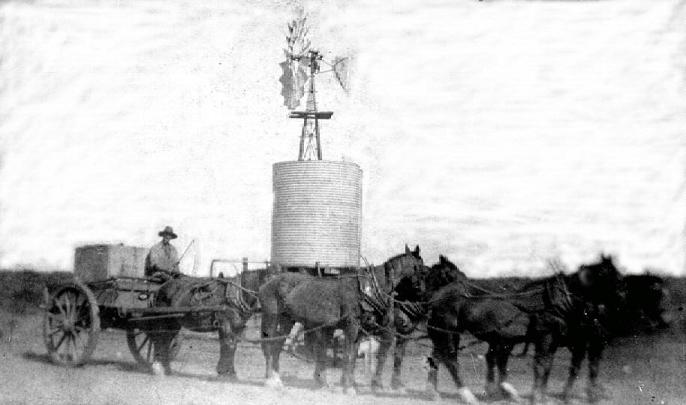 Karoonda is situated on the "Karoonda Highway" (B55) 160 kilometres from Adelaide, in the heart of the Murray Mallee.

It takes its foundation from 1911, when the Karoonda Bore was put down to provide initial water for the first farming pioneers, already clearing land in anticipation of the proposed Railway, which was essential to make farming these newly opened lands possible.

The first train (contractor's) arrived at the "Thirty Mile" later to be Karoonda  in June 1912.  When the railway system was extended to Peebinga and Waikerie in 1914, Karoonda became a very important rail junction.

The survey of the township was not completed until late 1913.  Meanwhile a small "pre-survey" settlement of a Smithy, a Store with a Post Office facility , even a Bank, had sprung up nearby the Bore.

Today, the attractive, well serviced and growing town of about 400 is a credit to the resilience of its pioneers, who experienced extremely difficult conditions from the earliest times.

The district population of Karoonda East Murray at the 2011 ABS Census was 1033, engaged in the predominant industries of sheep and cereal growing, with minor pig and cattle enterprises.

Football, cricket, lawn bowls, tennis, swimming, netball and other recreation opportunities are at hand.  The Lions Club is very active in our community, while the Historical Society has initiated the Pioneer Park complex and Railways Museum.  The unique Karoonda Nature Park is part of the town area, and has extensive walking trails both for educational and recreational uses.